An Interview With An American Pakistani Writer – Saadia Faruqi

Wa alaikum assalam, I am honored to be profiled in this very cool magazine! I was actually surprised at the response I received from some sections of the Islamic media, because my book is absolutely not controversial. It is a collection of short stories based in my birth country of Pakistan, and it deals with the real issues and challenges people face every day. So yes, there is crime, there is a certain disbelief in God at times, there are other un-Islamic practices… all the characters aren’t good little Muslims. It’s very realistic, very impactful. However, I didn’t go into graphic detail at all in the book. It’s PG, I promise!

Haha! Okay, I can’t wait to read it insha’Allah.

I think that what makes the characters stand out is their humanity and resilience. They are truly a reflection of the society they live in. You will come across many books where characters have unique or interesting things happen to them, but this book isn’t exactly written on the same premise. I mean, let’s face it, the majority of human beings on earth live pretty ordinary lives, especially in a poor country like Pakistan, where just surviving is a badge of honor. So in Brick Walls, the characters all face issues or problems that would not be typically described as extraordinary, but are pervasive in such countries. For instance, one young widow loses her job just as her son’s fever skyrockets and she desperately needs money for the hospital. What does she do, where does she go, does she lose her faith in God, in people? The beauty of the characters is in the way they face those struggles every single day with courage and self-respect. Hopefully, that’s why they will stay with my readers long after the book is read.

I see. That intrigues me, lol!

Actually many people have asked me about the cover, so this is a very timely and appropriate question. I have been blessed with such a great publishing team, who has given me an immense amount of creative control even to the extent that they took my advice and instructions on the cover. Now, I want to say that I am not an artist at all, in fact if you asked me to draw a star or an apple I’d have a hard time making it recognizable. But I did know what I wanted the cover to look like, and so I drew it freehand, snapped a picture with my phone and emailed it to my publishers. Voila! They were able to find cover art that matched it pretty well and from there we made several edits and changes to achieve the effect we have now. I am so pleased and in fact grateful for it, because even for me personally as a reader, the cover can often be the deciding factor in my purchasing decision.

You’re hilarious! I actually do the same with most of my covers. I draw my vision of them. Then I send them to designer, and it goes from there.

I talk about this in detail in the Introduction of the book, so I will only give the short version here. Whetting your appetite, so to speak! I am a cultural sensitivity/interfaith trainer, and I was finding over the last several years that whenever I would be invited to speak somewhere the audience would begin to ask me questions about my life in Pakistan. How come your English is so good, what kind of clothes did you wear, were you allowed to go to school, did your father beat you? It was frustrating to me for a while because I haven’t lived there for 16 years, but finally I realized that the American media is filled with news about Pakistan, and that news is all bad. So ordinary Americans – and probably people from other countries – are hungry to know what life is really like, away from the terrorism and the crime and poverty. I decided to write about the lives of Pakistan’s ordinary people who you never hear about in the media, but are the life and blood of Pakistan. In fact readers from all countries will recognize these people, because issues like poverty, alcoholism, crime, political power, and depression are universal. I also include a lot of description of everyday events and activities, the scenes outside the window, the bazaars, the crowds, the foods. It’s a way of bringing the true Pakistan to life.

Good for you for taking this initiative. The misinformation is real and I’ve faced plenty of that. So, I can understand your frustration and your desire to set things right the way you can.

Hmm. I think only a fool holds any ambitions about their writing. It’s such an arduous process, so much rejection at every turn, and ultimately it often ends up being less about writing and more about selling. Yet I nurse my wounds and get back in because writing is in my blood. Definitely in the long-term I want to write more, in fact I’m thinking of some work related to Pakistani American immigrant life as well. But in everything I write, I always need to have a cause, a reason for picking up the pen… be it highlighting an injustice, or showcasing a reality, or encouraging and empowering a group of people. It has to mean something to me personally.

Very true. It’s very challenging and about passion. And, I’ll keep you in my prayers, ameen.

Yes, I am planning to hold an online book launch using a webinar type of service, mostly because I wanted people from all over the world, including my friends and family in Pakistan, to participate and celebrate this happy occasion with me. The video from the event will be available on my website shortly. I’m also planning on a physical launch later in June insha’Allah in a small indie bookstore to celebrate with my family and friends.

7. In what formats is your book available?

It is available in paperback and Kindle versions from most book chains including Amazon.

Readers, please check it out! Thank you for being with us Saadia. The team and I wish you all the best with your debut novel. Alf Mabrook! Masalam!

Saadia : Jazak’Allah khair for asking me to share my thoughts, it was an honor! 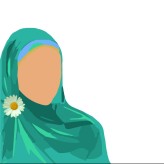 Papatia Feauxzar is a former corporate America Senior Accountant. She focused on personal finance in graduate school. She has a Master of Science in Accounting (MSA). Around the year, Feauxzar expatiate on personal finance and romance tips here and on her blogs. She is also the Online Editor of Hayati Magazine and the author of the first Ivorian Cookbook in English. Also a poet, you can read three of her pieces in "WOKE & LOUD: A Faith-Based Medley of Muslim Poetry & Spoken Word" published by Inked Resistance. Visit her at www.djarabikitabs.com or www.fofkys.com .

Tried & Tested – An Interview With The Author Umm Juwayriyah

Hayati Magazine@Hayatimagazine
222 Following 573 Followers
On my first day at university, I was anxious about not knowing anyone. So I tried to cling on to people who looked… https://t.co/Pc4XksZtIX
18 hours ago
The Journal of a Traveler – Something New https://t.co/C7bwfL1DXV
2 days ago
KD Sisters Style https://t.co/gnHTIRKX95
5 days ago
Raising Mumeens — An Interview with the Author https://t.co/YvEw5Nr2lx
2 weeks ago
Written Versus Not Written Stuff : Child Soldiers and Islam https://t.co/jbMJz94BS5
3 weeks ago