I had a short stop at Short Stop in Melbourne. I heard their doughnuts were worth trying and therefore, decided to see for myself. They had about 9/10 doughnuts on display that you could choose from. They also serve coffee for you coffee lovers.

Getting to the store, I confirmed that their doughnuts were vegetarian. They did however have one that had alcohol. I guess the waitress was trying to convince me that it was okay because she was like ‘It has a bit of alcohol’. A little alcohol is definitely too much though; haram and stuffs.

I took quite a bit of time to make up my mind but I eventually chose the Earl grey & Rose doughnut and the Lemon Lavender & Honey. I requested for the doughnuts to go, paid and was on my way. M took some artistic photos of me with the doughnuts BUT I don’t think I will be posting them. This should be a note for me to take lip balm out with me all the time.

First thing to note about the doughnuts: they were very fragrant. It felt like eating roses which was really the case with the Earl grey & Rose doughnut. They claim that to get the best out of their doughnuts, you should eat them 3 hours after purchasing; I had one the evening after I bought them and the other one the next day and I can’t say that they were no longer fresh. They were left in the take away bag too, their lovely aroma filling the space around them.

The Earl grey & Rose doughnut was the first one I tried. It is a doughnut made of earl grey infused cake batter and topped with a rose water and rose petal icing. (You can read more about it here). It is a very pretty doughnut but it was toooo sweet! I would never have guessed, by looking at it. The donut itself wasn’t sweet, it was the icing. It had a ‘filling’ which I liked too; couldn’t place the flavour. By the time I was done eating this doughnut though, my throat felt a bit sickly. Probably best to pair with a drink that’s not sweet at all. It is, however, quite a fancy doughnut.

The Lemon Lavender & Honey doughnut, which was sugar coated, wasn’t as sweet as the glazed one. Its taste reminded me of doughnuts from home. Although I had it the next day, it wasn’t completely dried out; the generous filling added moisture to it. I remember how jam doughnuts at home hardly have any jam filling. This was definitely a better doughnut than the glazed one.

I would advise that you visit for the experience.

Both doughnuts cost $10. Short Stop can be located at 12 Sutherland Street, CBD, Melbourne. 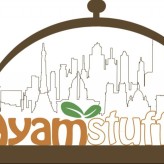